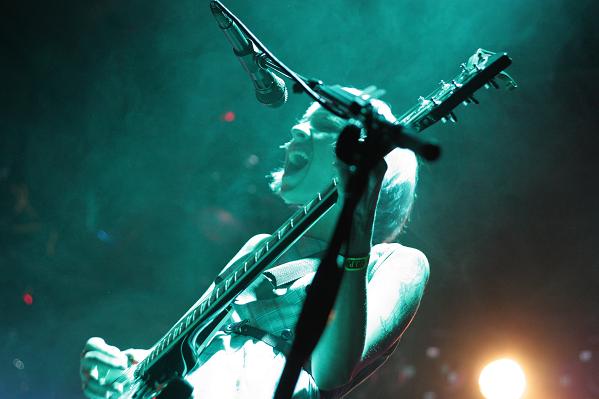 Storytelling. During a set that had their bass player banging a glitter saturated drum and a guitarist that could have passed for the son of Graham Parson’s close friend, Keith Richards, “Ives the Band” lead singer, Jason Tolliver paused the musical circus to have a talk with the audience. The contents of his interlude included the story of a man named Harold who inspired the name of the band, his ability to tell a story, and his fight with cancer. “We hope you enjoy our Musical Sculpture” were the words that Tolliver used to finish his personal story and introduce the next chapter of their journey.

Music is storytelling. The message shared depends on how the listener interprets it. From the kid who is so moved by the story in their headphones that they toss and turn in bed with every wave of sound, to the broken hearted who hold a song as a catalyst to push them to reach the point of complete breakdown allowing every new second afterward to be less painful than the last, or the group of friends/family/partners who decide to share a night together in the comfort of music. This was such a night.

The first storytellers of the night were The Spanx from Pensacola. Erik Lollar started off by acknowledging his mother’s birthday on the night of the show. To me,The Spanx are a visual and musical play on the arcade game whack-a-mole. Surreptitiously wild and extremely fun, you are guaranteed a surprise from somewhere in their set. Always keeping you on your musical toes; be it drummer, Blake Roney, yelling during the space created during a break mid-song or Lollar and Christal switching instruments between songs. Before striking their set and clearing the way for the next band, Lollar took a second to thank the audience, the headlining bands, promoter Jonathan Parish and all of the staff of Vinyl Music Hall. Now that was a classy gesture that would make any mom proud.

Following closely in the footsteps of her headlining siblings, Christine Dupree took the stage with a near minimalist set. Accompanied by her guitarist, she approached the front of the stage with only her guitar and her songs to sing. Quietly confident, she brought the audience into her world with a performance that gave me the feeling of the old open mic nights at Van Gogh’s coffee haus…..minus the high stage and expensive lighting system hanging over her head.

Up next, executing a set that fell near the extreme opposite end of the younger Dupree’s performance were the previously mentioned Ives the Band. Led by Tolliver, Ives the Band definitely have a 1990’s San Francisco Sound way about them, similar to fellow Bay Area groups of that era like Third Eye Blind and Train. Supported by Kyle Moore (guitar), Bryce Newman (bass), Drew Newman (drums), Jason Tolliver (vocals, guitar, piano)the band added a little extra flair to the night’s lineup. Tolliver bounced from guitar, to piano like Tigger from Winnie Pooh while the entire time balancing a hat on his crop of hair. The boys left the audience energized and the stage covered in glitter.

With instruments cleared, the headliners of the night, Eisley (consisting of the Dupree siblings, Chauntelle (guitar), Sherri, (guitar/lead vocals), Stacy (keyboard/lead vocal), Weston (drummer) and cousin Garron Dupree (bass) took the stage in a sea of white light. I wasn’t expecting Zakk Wylde pinch harmonics or a mosh pit to break out in front of the stage, but the band was more energetic than I had anticipated. The leader of enthusiasm was Sherri DuPree whose weapon of choice was a Black and White Rickenbacker guitar identical to the one carried by the figure tattooed on her upper left arm and shoulder.

Sherrie introduced nearly every song with the glee of a giddy girl scout. Moving up, down, and around her section of the stage, she stopped at one point and jokingly declared that she was tired and getting old because will be turning 27 this year. She also announced that earlier in the day, they went to a park….a dog park. I immediately realized they must have gone to Bayview Park, my favorite park in Pensacola.

Sherry proclaimed that their last song of the night “Sad” was for everyone who has been “screwed over in a relationship.”

Shared experiences in song, life and music. We all have a story to tell and some people are willing to share.

For more pictures from this show, go to this link….FLICKR PAGE of Eisley, Ives the Band, Christie Dupree & The Spanx.