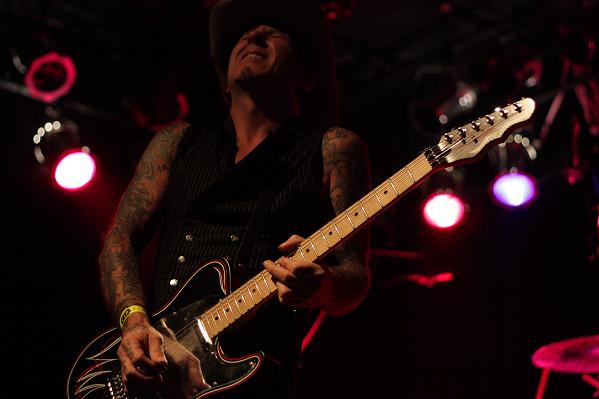 My introduction to Tracii Guns began when I was a teen-ager flipping through the pages of Guitar World magazine in high school. He was buried among the interviews and guitar tabs, looking somewhat out of place among the 80’s virtuoso guitar gods like Joe Satriani, Yngwie Malmsteen and Eddie Van Halen. He looked like one of the guys from that that new band taking over the country, Guns N’ Roses. I soon found out that he was in Gun’s N Roses. Telling that story would take as long as it took Axl Rose to complete “Chinese Democracy”, so to keep it simple, Tracii Guns was replaced by a future lead guitar god in a band that would soon become one of the most popular bands in the world. He basically followed in the footsteps of Dave Mustaine, who was kicked out Metallica two years earlier and replaced by Kirk Hammett.

As cool as Tracii Guns looked, I never really got into the music of L.A. Guns, but here was an opportunity to see and hear “them” live. I use “them” because there are two L.A. Guns currently in existence; One band with original member Tracii Guns on guitar and the other band with L.A. Guns members Phil Lewis (vocalist with Tracii from 1987 until their split in 2002 when Tracii left L.A. Guns to form Brides of Destruction with Nikki Sixx while the boys in Motley Crue were experiencing a heavy case of musical chair tension.) Surprisingly, no one has turned this L.A. drama into a movie because these guys were Tupac and Biggie before Tupac and Biggie. Now that you have the backstory….lets get on with the show!

Lead by A.J. Fratto, the first band on the bill were Below The Stitch. Hailing from Pensacola, these guys were a perfect musical compliment to L.A. Guns, mixing hard rock roots with a modern gloss for finish. Fratto looks like a frontman that wants to rock you and possibly rip your head off if you dare stand still while guitarist, Gary Humphrey shreds away on a collection of guitars that would make any metal head jealous. They concluded their set with a blazing cover of Ozzy Osbourne’s “I Don’t Know.”

A funny thing happened on the way to the next band, 60 Cylces of Sound. A cool selection of 80’s rock songs played on the PA system while the stage was being set. They started off with Ozzy’s “Shot in the Dark” and “Somebody Save Me” by Cinderella and while I was in the bathroom, I heard the familiar intro of Bob Dylan’s song “Knockin’ on Heaven’s Door” covered by who? None other than Tracii Guns’ old band, Guns N’ Roses. Someone must have caught it because the song wasn’t played in its entirety, but if I could feel the awkwardness in the bathroom, I could only imagine how crazy it must have been for Tracii Guns and crew.

As soon as the 80’s music parade ended, 60 Cycles of Sound made their way to the stage for their first performance at Vinyl Music Hall and their first show after a long hiatus. The last time I saw them play was during a Halloween party in 2008, so I had been anticipating what they would bring to the stage ever since this show was announced. They didn’t disappoint. Rodney Uberroth (guitar/vocals) told the audience to “Join us” and “Come closer” in between songs while Jason Holstein manned the bass with legs astride like a soldier preparing to fire heavy artillery. During their sonic invasion, drummer Ben Bogan powered his way through each song with such force that he would propel himself over his kit in a crazy contorted fashion that looked almost painful while Uberroth and Jason Hurt (guitars) donned military caps toward the end of their set. There were some head-scratching and perplexed looks to be found in the audience, but they provided a nice musical change of pace for the bill.

That is one of the beautiful aspects of seeing a live show. Not only do you get the chance to see the bands you want to see, but you have the opportunity to check out differing styles of music. In 1981, the opening acts for the Rolling Stones U.S. Tour were the J. Geils Band (Freeze-Frame, Centerfold), George Thorogood (Bad To The Bone, Drink Alone) and an emerging musical legend named Prince. When Metallica and Guns N Roses teamed up for their stadium tour in 1992, the opening act was Faith No More who had just released one of my all-time favorite albums “Angel Dust.” Rock N’ Roll is about taking chances and that is what Vinyl promoter Chris Wilkes did by putting 60 Cycles of Sound on this bill. They rocked just like the other two bands, but in their own unique way.

Now on to the headliners, L.A. Guns. The band came out to a warm applause from their loyal fans, who also had the experience of hanging out with bass player Jeremy Guns as he enjoyed himself in the venue and watched the opening bands play. Lead singer Jizzy Pearl crooned and struck Elvis style posses to the delight of a few female admirers in the audience. He may not be up there with Sebastian Bach in the vocal department, but he definitely hit the notes and sold every phrase to all ears available.

As I was in the photo pit taking pictures of the performers, I finally made my way to Tracii Guns, the guitar-slinger I only saw in the pages of Guitar magazines throughout the years. He probably had no idea that I played guitar or had crazy respect for musicians in general, and even though I was just a guy with a camera, he stepped up closer and squeezed every blessed note out of his guitar while putting on a show for me, my camera and everyone in that club. Forget the drama and ghosts of the past, it was all about “now” and what L.A. Guns could deliver to the people that came to see them. As the concert ended and I left the venue, one of the lyrics from an L.A. Guns song resounded in me for the rest of the night.