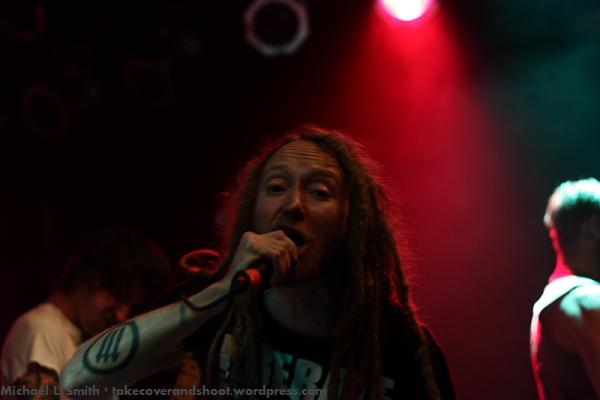 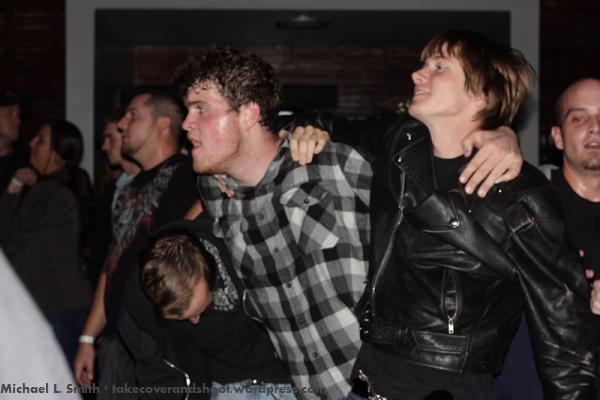 It is only fitting that two days after Election Day, Strike Anywhere brought their message of global punk awareness to Pensacola, Florida, which is a town very familiar with the band since their inception in 1999.

“Punk Rock has had a lot of changing. We’ve been around for 11 years and have been to Pensacola every year” declared front man, Thomas Barnett. Noted for their sociopolitcal awareness, Strike Anywhere were making their Vinyl Music Hall debut in front of a loyal local contingent.

Opening act for the night, were Pensacola favorites “Diversity is an Old Wooden Ship.” Fusing rock, ska, and punk, the hard-working band have amassed a devoted following in the area. Positivity and humor flowed throughout the set as Josh Taylor (guitar/vocals) joked with the crowd between songs and cut-up with fellow bandmates John Sisson (guitar), Jeff Peacock (bass), Ryan Freeman (drums), Jonathan Rodriguez (tenor sax) and Matt McDowell (trombone). Towards the end of their set, Taylor took a minute to ask the audience a “quick favor.” As the vocalist pulled out his cell phone, he told the audience to shout “F’ Diversity is an Old Wooden Ship” as loud they could so it could be recorded on his phone. The crowd followed the commandment and the band launched into a few more songs before ending their set.

Next on board were “The Flatliners” from Canada. Enjoying a short touring stint opening for “Strike Anywhere” these guys enjoyed every second in front of a crowd that had quickly grown since the doors opened for the show. Lead singer/guitarist Chris Cresswell mixed it up with the crowd by saying “Let’s do something! Dance around in circles!” A few fans got downright giddy; one girl who had made her way to the side of the stage, pleaded with Jon Darbey (bass) to play her favorite song. Juggling his water bottle and her enthusiasm, he tried to answer her plea, but was quickly met with her shouting that it was her birthday. Darbey quickly conferred with Cresswell and they granted the young fan’s request. When the song was finished, Cresswell smiled and jokingly declared that was the “worst birthday present ever.” Adding that it had been so long since they performed the song, he had forgotten a few of the words. At the conclusion of the set, Cresswell thanked the audience by saying “You’ve made us four happy Canadians.”

The time had arrived for “Strike Anywhere” to begin their much anticipated show. Providing testament to their non rockstar demeanor, Thomas Barnett walked from the back of the club, through the crowd and to the front of the stage to lay out the band’s set lists in their appropriate places. Void of ego and pomp, Barnett was joined on stage by Matt Smith (guitar), Garth Petrie (bass ), Eric Kane (drums ), and Mark Miller (guitar)

Barnett quickly started the show with a quick observation about the “things that keep us basically alive; connections.” Fighting against the “lies and deceit of the free market.” As quickly as Barnett had started his observation, he quickly ended it, making way for the music to begin. The serious tone of his introduction grounded the audience for the power soon to be thrown from the stage to the heart and bone of each person in attendance. Weaving his way through songs, sound and bodies, Barnett engaged the crowd with every look and lyric he projected at them. In return, the crowd matched nearly every word of every song with such fierceness, moments were born where their collective voice mirrored Barnett’s amplified lungs in sound and sincerity.

At one point, clouds of a smoke from a nearby smoke machine flew on stage, to which Barnett ever-so politely chided “Cut the smoke, we’re not a mystical band.” Maybe so, but the group from Richmond, Virginia moved the audience with a force that most organized religions would find difficult to challenge.

When their set ended, the band exited the stage with the same humbleness they exhibited when their show started. No encore, no smoke and no superstar attitudes.

For their fans, it will be an arduous exercise in patience waiting for 2011 and Strike Anywhere’s next visit to Pensacola, Florida.

One thought on “* Strike Anywhere, The Flatliners, Diversity is an Old Wooden Ship @ Vinyl Music Hall. 11/04/10”