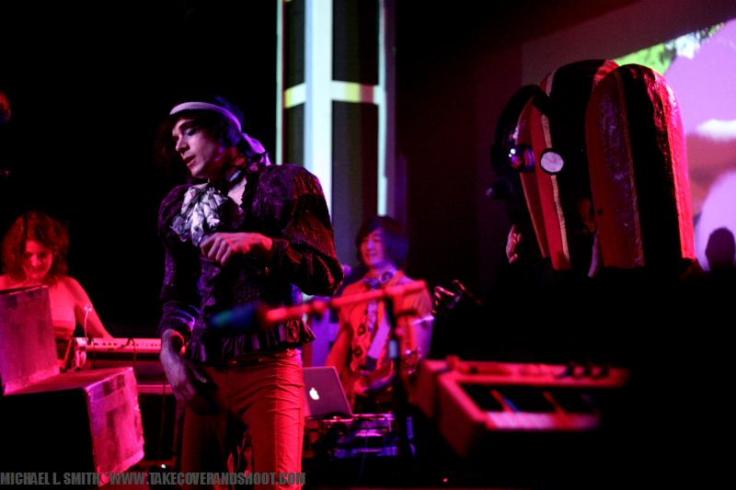 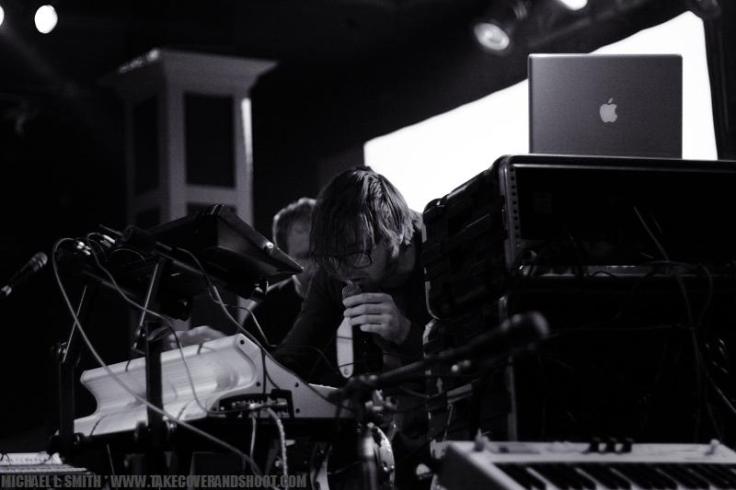 A Play in Three Acts

Cast of Characters:
-Kevin Barnes: The Dapper Frontman. Skilled in playfully gymnastic vocal delivery, guitar chops, equestrianism and conflict resolution. Able to change all costumes in a single bound.
-Bryan Poole: The Master-at-Arms, sideburns and sunglasses. Carries a six-string, booty-shaker peacemaker.
-Dottie Alexander: The Keyboard/Guitar magician. With a tambourine by her side, she is the co-dealer of smiles, joy and melody.
-K Ishibashi: The Keyboard/Guitar magician. Keeper of sonic secrets, with a violin and a mac by his side, he is the co-dealer of smiles, joy and melody.
-Davey Pierce: The Secret Agent. Don’t be fooled by this gentleman’s cool decorum or the peaceful nature of his eyewear and tie ensemble because his bass grooves are funkin’ deadly.
-Nicolas Dobbratz: The Energy Ninja. Performing and navigating a sea of electronic gear while having a guitar strapped around his body.
Thayer Sarrano: Sonic Guardian. Keeping the peace and sonic rhythm by any means necessary via guitar, keyboards, hand-claps and big black stylin’ shoes.
-Clayton Rychlik: The Double Agent. Hitting the skins for Of Montreal and pounding the bass for Yip Deceiver.

-Dancers: The talented assortment of physical performers who added even more life and energy to the show.
-Crowd: A crazy enthusiastic audience.
-Kellie of Pensacola: Lover of family, David Bowie, Depeche Mode, Erasure, and almost anything even close to resembling 80’s electronica. She brought her husband and daughter to enjoy the show.

Prologue:
Created in the college town of Athens, Georgia and absorbing every molecule of the town’s rich artistic atmosphere, the musical collective, known as Of Montreal, have been sharing their dance-rock, groove-pop theatric creations with the world since 1996.

With a performance originally scheduled for January 13 at the Soul Kitchen in Mobile, Alabama, the band was held captive by snow, iced roads and dangerous weather in Georgia, but proving their touring metal, the group honored their rock commitment and rescheduled the show for the immediate Sunday.

(The house lights fade to black)

Chorus: The side project of Davey Pierce and Nicolas Dobbratz, Yip Deceiver recruited Clayton Rychlik (Of Montreal’s drummer) to play bass for this performance. Mixing electronica, humor, new wave hip-hop and an endearing freshness, Yip Deceiver won over a Mobile crowd that will most likely return when the band returns to the city for their tour in February.

(Yip Deceiver’s tech-gear is struck, making way for Of Montreal’s gear to be set)

Young man in crowd: “Love it!”

Chorus: The audience quickly transitions from vocal adulation to physical elation as the Soul Kitchen becomes a dance party circus. Breasts, chests, fingers and breathe bounce on my back as the palpitating mass of people grab and ground each other throughout the liquid pulses of “The Party’s Crashing Us”

Ever infused and amused by the checkerboard brigade of dancers, a street-team of beautiful blonde angels, and assorted participants, the dancing never stops. The multi-tiered parade of lights, sight, touch, and music becomes too euphoric for some members of the audience as the human mouth is not equipped to contain the amount of stimulation and emotion building inside and around them.

“Our Riotous Defects” is followed by drumstick clicks quick to elicit a matching chorus of claps, followed by the short syncopated introductory guitar strums of “Suffer For Fashion.”

(Enter the Skeletor Kings in matching unitards. After lifting Barnes into the air and dangling him close to the audience, the Kings engage in a standoff. Barnes saves the day and teaches them how to make up. The Skeletors kiss and embrace.)

Chorus: Individual voices are no longer identifiable, only the sounds of audience ecstasy is recognizable as the band services the mass with “Sex Karma,” a song with a strong 70’s space odyssey sound with more lyrical oomph and sexual declaration than Kubrick’s Eyes Wide Shut.

(Enter Mr. Piggy and Miss Piggy. The couple bounce and dance while the flaming sun-gods orbit the stage)

Chorus: Developing “eyes” for Barnes, they begin to flirt while Mr. Piggy circles the foreplay in jealousy.

(The band transitions into a torrid calypso beat that could easily melt Alabama snow ; )

Chorus: Mr. Piggy is pissed and is staring at Barnes and Miss Piggy.

(Barnes and Mr. Piggy sandwich Miss Piggy and ignite a barnyard-a-trois that leads to an ending that would make the real Miss Piggy jealous.)

Barnes: So we’ve never been here before. So we’re going to sing a song about peace, love and understanding. Celebration of life, here we go.

(Band kicks into “For Our Elegant Caste”)

Before the end of the night, Of Montreal kicks into a cover of “Sex Shooter” a funky song written by Prince for Apollonia and performed in the movie Purple Rain.

Chorus: Crowd continues to dance and crash to the waves created by Of Montreal. Reaching the highest point of the night and just when no one thought it could get any crazier……..

You will have to finish the play in your own way and enjoy the special adventure that is Of Montreal when they hit a stage near you.