“The Return of Rock to Vinyl” was the declaration of Swim With Sharks vocalist/guitarist Leer Baker. A mid-set declaration that punctuated a night full of bands rolling out their blood and sweat for a wild crowd geared-up to return the favor. Prophetic in direction, Baker’s Merlin-like proclamation cut straight to the bone. 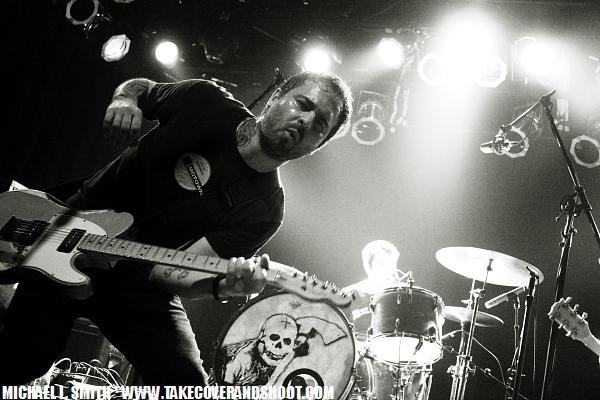 Opening the show at Vinyl Music Hall in Pensacola, Florida was Rob Dill’s solo project Martyr: The Unicorn. Laced with original compositions and a few covers dedicated to close friends in the audience, Dill worked the crowd with his set of acoustic rock.

After Dill’s set was the reunion performance of American Suicide who, according to vocalist/guitarist Aaron Taylor, played their last show as opening act for The Architects’ previous show in Pensacola. While Taylor secured the lead vocalist duties, brothers Robert Taylor (guitar), and Lawrence Taylor (drums) joined forces with Roy Clark (bass) as the group effortlessly launched into the rock, blues, punk crush that marked American Suicide shows and recordings since the band’s creation in 2000.

Following the American Suicide reunion and staying true to his word, Baker and the crew of Swim With Sharks delivered on their end of his rock promise. With Aaron Taylor doing double-duty on guitar for both American Suicide and Swim With Sharks, the Pensacola outfit, rounded out by Nicolas Pauwles (bass), and Dave Myers (drums), will continue delivering the rock on June 5th at The Handlebar as they open for New York punkers The Turbo A.C.’s.

Kicking the night’s adventure with a strong boot of blues n’ roots was Betsy Badwater and The Hillbilly Chrome. Performing a slew of new, unreleased songs, the team of Badwater and Lang Hollowman kept the rock energy flowing in preparation for the headliners to take the stage.

Marking the evening as their Vinyl Music Hall debut, The Architects quickly drowned the crowd in a wave of rock and sweat that has proudly been a trademark of the working-band’s energetic live shows, confirming their reputation as a high-intensity live band. With their no rest for the rockin’ ethos, The Architects used their one week off as supporting group for the My Chemical Romance “World Contamination Tour” to headline a few dates that included their show at Vinyl Music Hall. Born of the remaining members of the ska-rock, punk band, the Gadjits, The Architects were immediately formed in 2004 by the Phillips brothers. The children of an art teacher and jazz musician, music played a major role in their household and their passion for live performance was on full display for the Pensacola crowd.

Led by Brandon Phillips (vocals/guitar), Zach Phillips (bass) and Adam Phillips (drums), the brothers enlisted the power of Keenan Nichols (guitar) to complete their Kansas City, Missouri rock sound. Just as King Arthur waved the mythical weapon of British lore “Excalibur,” so does Brandon Phillips, who calls on his beaten n’ true, blue Fender Tele to execute his will. Cutting chunks of hot rock, Phillips’ weapon is marked “Excaliber,” daring anyone to stand still during a raucous set by The Architects.

In the end, Baker’s evening promise proved to be as true as steel.