“It goes by so fast…banjo time.” joked Rasputina creator, Melora Creager as she put aside her banjo and continued the trio’s Cello-Rock performance at Vinyl Music Hall. On this night, Creager was joined by Daniel de Jesus (cello) and Dawn Miceli (drums) for their return performance at the popular Pensacola, Florida venue. Opening artists were the Toronto group Wilderness of Manitoba. 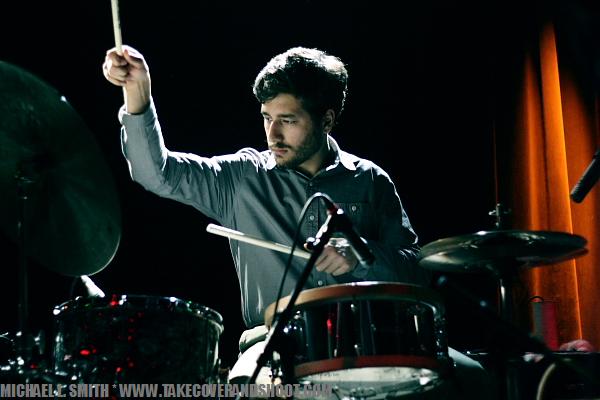 With miles of roads and festivals behind them, the group, comprised of Scott Bowmeester (vocals, guitar, bass), Stefan Banjevic (guitar, banjo, more) Will Whitwham (guitar, ukulele, keyboards) Melissa Dalton (guitar, shakers, vocals), and Sean Lancaric (percussion), are constantly touring and enjoying their supporting slots with artists like Aimee Mann. Before their first ever show in Florida, Scott Bouwmeester answered a few questions.

What can the audience expect from a Wilderness of Manitoba performance?
SB: That’s a tough question. This will be our first show in Florida actually. I don’t know, we play a different show every night we play. It’s an atmospheric show, for sure.

What is the coolest part about being in this group for you?
SB: We’re really loving the tour right now. It’s a very creative project and I love that about it. There’s a lot of freedom. It’s a really good band, a really good project to be in. Our live shows are wicked. We can turn what we do in the records on the stage.

What advice would you give to an artist who wants to be where you are?
SB: Be honest. Be honest with yourself, be honest with what you’re doing. Other than that, I can’t really say anything. We’re very fortunate and we feel really lucky. We definitely don’t take anything for granted. We’re incredibly grateful to be where we’re at. Why we’re here? No idea. We just work hard and we’re honest with ourselves. We’re honest in everything we do.

What are your top 5 albums of all-time?
SB: “OK, Computer” (Radiohead), “Zeppelin I” (Led Zeppelin), “Dark Side of the Moon” (Pink Floyd), “Rumours” (Fleetwood Mac), and right now probably, “A Night at the Opera” (Queen).

Are there any artists that you’d love to work with, collaborate, tour with?
SB: Oh, plenty. We look up to so many people. We toured with Aimee Mann this summer and that was really amazing. Neil Young. I would love to tour with and perform with Neil Young. I love Deadmau5. I’d love to do something with him.

What have been your most memorable concert experiences as an artist and then also as a fan?
SB: We played End of the Road (annual music festival) in England and that was probably the best show we’ve ever played. From a fan perspective, I saw…man this is a tough one…I’ve seen so many amazing concerts. Seeing Radiohead live was pretty awesome. I’ve seen them a few times. They played in 1997 right after “OK Computer” came out, like North of Toronto. It was one of the best concerts I think I’ve ever can remember.

What is the best advice you’ve ever been given?
SB: Follow the Yes’s. In your life, whenever you come to a No, try something else.

Who gave you that advice?
SB: It was an older gentleman who was just talking about his life and how he…it was over dinner. A friend’s father…in your life, just always follow the yes’s.

And why so?
SB: Texture. I love peanuts.