“ It’s easy to feel like the victim instead of a survivor. If you’ve survived it, then that’s exactly what you are, a survivor.” – Otep Shamaya

It is another step in the mission of Otep Shamaya, artist, activist and leader of OTEP. A mission characterized by impact more than goals.

You would be lost trying to describe OTEP; empowering, crushing, rap, protective, metal, healing. The person, the artist the band are drawn together symbiotically. The best way (I have found) to understand the music and message is to listen and feel.

One week before the OTEP, Butcher Babes, One Eyed Doll and Arcanium tour hit Vinyl Music Hall in September Otep Shamaya discussed her art, life, and more for my weekly music column in the Pensacola News Journal. 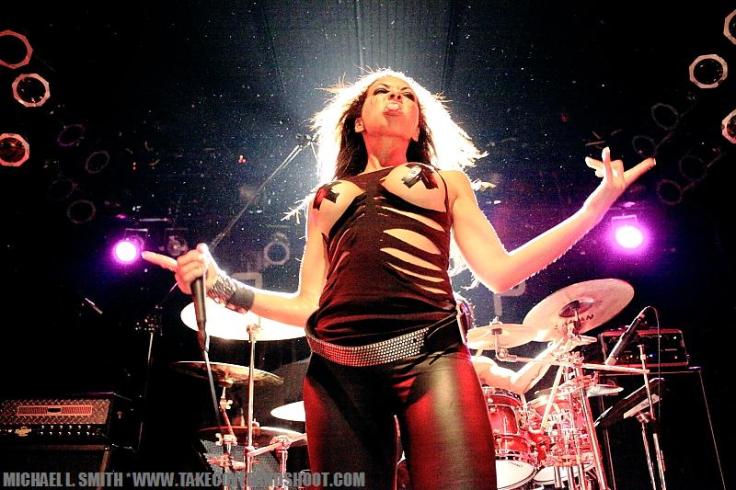 Here is a link to the article “OTEP brings passionate metal to Vinyl Music Hall” and the full interview follows below.

Shamaya wants to inspire those who share her struggle.

MS: With the recording, touring, live shows, and activism, what is the most rewarding part about being Otep?

OS: Having the opportunity to be able to do all those things. My devotion to a work ethic that enables me to be able to do all of the different things that you mentioned. I don’t know…rewarding in the fact that I think that I’ve been able to, through music, find people that were like me before I released an album, before I ever became a performer.

MS: Did you always want to do music or art? Was that something from your childhood or did you develop that later on?

OS: Art, yes. I didn’t know that I was going to get into music until much later. The first thing that I discovered, well I don’t remember discovering it, because it happened well before I could speak, but my mother tells me that I was just obsessed with drawing and anything that made a mark or a color, I wanted my hands around it; I was drawing on the walls, on my shoes, on bills, on tables, on countertops, whatever I could.

MS: Some people are always told, “Being a jack of all trades” you’ve got to be one thing or the other, when did you realize that you could do it all?

MS: Does this all get overwhelming for you?

OS: Well, I mean sometimes, with everybody, you know, the world seems so unjust and it seems so unfair and sometimes unbelievable, for us right now with what’s going on with the conservative politician, Todd Aiken, who said that a woman’s body can shut down and illegitimate rape, unbelievable that a grown man of that age and position who has children and grandchildren I believe, doesn’t understand how human biology works that a woman’s body can basically abort a baby that is derived from rape. It’s just an unbelievable statement, but some people might believe that he’s just stupid or he’s just dumb, he misspoke, which is…that’s an obvious lie because you don’t misspeak about something like that, it’s because the eventuality of that, if you follow that logic that a woman can shut down, an illegitimate rape, means that if she was pregnant, then her body knew that the rape was legitimate and that she deserved it or that she wanted it and so there’s no need to have an abortion because basically the Republican Party is lying when abortion should be illegal accept in cases of rape or incest. Well now they’ve added on this requirement that, “Well the women’s body has to decide whether the rape was legitimate or not. And if it was legitimate, no abortion can be had because she got pregnant by it. It’s an unbelievable nonsense, but this is how propaganda spreads. The bigger the lie, I suppose or how preposterous it is, makes it more believable to some people.

MS: I was going to ask you about that, Senator Akin too, but you tackled it perfectly. When I heard his statement, I was just, “Wow. Unbelievable.”

OS: It has to be like, everybody, even if you are not…even if you’re conservative, or libertarian or even if you just don’t care about those kinds of things, you have to look at that guy and go…he’s a prime example of why we need to fund health and sciences and biology in schools and make it fun so that kids understand how our bodies, the things that we’re trapped in our entire lives work. It’s unbelievable, but this is a time like this if you need a…there’s no extra energy that needs to be gathered, it’s like someone walking up to you and “The sky is red.”

MS: I saw your last show at Vinyl and I was blown away by the empowerment, who or what inspired your activism and empowerment?

OS: I don’t know. I guess, I grew up really poor and I was surrounded by people that were born to money and they were born into privilege and they were not better than my family, they weren’t smarter than my family, they weren’t smarter than I was, they didn’t have the talents that my family had, that I had. But just because of the luck of their birth, they had more access to the world than we did. They had more access to health care, they didn’t have to sit 18 hours in a community hospital because it’s so underfunded that it’s understaffed and with volunteer doctors who just care about people. I knew that I was stronger physically than a lot of these people. And a lot of them were boys, so that was a lie that was tossed out of my mind that women are socialized to believe that we’re inferior and that we should, that we’re destined to be subservient to men, so I was stronger than they were, I could outrun them, I could outfight them, I could out lift them. Artistically, I was, it would come to me to have them draw pictures for their friends or their mother; they couldn’t do what I could do. Then growing up in this world of poverty and violence in the house, I didn’t want anybody else to grow up to feel the way that I felt, so I really put my mind to it that if I was ever in a position that I could help someone like me, I would and so I’ve dedicated myself to do that.

MS: I have a friend who grew up in an abusive family with his father and he said that hearing your music helps him.

OS: Music is universal, I don’t think that it’s genderized and I appreciate that I’m able to reach all people. I think that it’s important that people realize that this it’s a very common thing. It’s easy to feel like the victim instead of a survivor. If you’ve survived it, then that’s exactly what you are, a survivor.

MS: This tour, what can your diehard fans expect from this tour?

OS: They can expect what we always give them. A complete and total mutiny of the senses.

MS: What is the best advice you’ve ever been given?

OS: That’s a good question because I’ve been given a lot of good advice over the years. One of them is “Love myself first.” And that doesn’t mean to be self-centered or egotistic, it means that I deserve to love myself. Another piece of advice was, “Never give up.” And if I were passionate about something, “Go after it.” Life is so very short and there all the things people say, “It’s finite”, “Life is short, be happy” but true, we’re dead-I think Lewis C.K. said that “We’re dead a lot longer than we are alive.” One of my favorite periods of ancient history is the ancient dynasty of ancient Egypt and I can read all about the magnificence of that empire and the people, those wonderfully interesting people that lived during that time; complex and strange and barbaric and beautiful they were and an entire civilization devoted to art. Their language was art, there writing, their language was pictures. But all those people are dust, every single one of them and they’ve been dust a lot longer than they were alive, so I think it’s important that we don’t get to caught up in things that don’t truly matter and focus on being as happy as we can, while we can.

MS: Almost on that same page, what would Otep of today tell a younger Otep just starting out?

OS: Starting out in life or music?

MS: What about life?

OS: Life, I would tell myself, I’d give myself a hug and I wouldn’t say anything, I would just listen to me. I really don’t get a lot of that. You don’t get a lot of people who listen to you. They give you advice, they’ll tell you what you should do or shouldn’t do. And so very few people actually listen to what you have to say. I would listen first. I would listen to what was going on with me and what I was feeling and I what I wanted to communicate and I think I’d probably discover my own answer.

MS: This is a crazy question. Do you prefer crunchy or creamy peanut butter?

OS: Neither. I prefer Nutella. Not many people know about Nutella. Its hazelnut, basically it’s like peanut butter, but it’s made out of hazelnuts and it tastes like chocolate and it’s incredible.

MS: I have some friends that eat it alone. Do you put it on bread or just eat it by itself?

MS: Last question. Is there anything you want the fans or the people coming out or the readers of this article to know before you come to Pensacola, Florida next week?

OS: I would just like to thank them for supporting the arts and supporting live music and they’ve made my life’s journey so very gratifying.