The Pensacola Beach Songwriters’ Festival has enjoyed a lot of history in just four years. Co-founders Reneda Cross and Jim Pasquale have witnessed it all.

One week before the artists, organizers, volunteers and music lovers kicked off festival’s 2012 event, I interviewed Cross for the Pensacola News Journal’s “Music Matters” column.

Cross shared her memories of the festival and the people who’ve made it a special part of Pensacola music history. Here is a link to the PNJ article “Songwriters’ Festival has a mission to entertain and educate.” The full interview with Reneda Cross follows below.

MS: What has been the most memorable moment of all the Pensacola Beach Songwriters’ Festivals for you and why was that moment so special?

There are just so many different events; I could say the sunset cruise last year was just unbelievable. It was our first year with that and it had that magic moment going on. But then, I can’t say that would over shine the wonderful listening rooms that you go to and you’ll really be able to hear these stories because it’s kind of a quiet atmosphere and they’re getting to talk and actually talk to the people in the audience. It’s just a warming feeling with all that. So that’s what makes it so difficult to highlight any one particular thing being more special than the other.

MS: What can music lovers expect this year?

RC: Wow. This is going to be totally amazing, the talent we have coming in. It’s just overwhelming to me, the fact that I’m getting bombarded with so many wonderful artists and when I say artists-I refer to writers as artists sometimes-but they’re not always artists, some of them write and they don’t perform out a lot. We do have some artists coming that are actually writers.

This year we have Beth Nielsen Chapman coming in, which is just phenomenal. We’ve got Chas Sandford, Jim Brown’s coming in. These guys have written for so many wonderful people and “Moose” of course, Jim Brown, not only did the “It’s Five O’ clock Somewhere”, but he’s also Bob Seger’s lead guitar player. So it’s kind of hard to pinpoint anything with them as well because they’re all so engrossed with everything that they do.

MS: This is an amazing gem for our area. How did the Pensacola Beach Songwriters’ Festival come into creation?

RC: Actually, Paradise Renee Mack at Paradise (Inn) contacted me and asked me if I would consider-I ran another festival for 14 years, so my experience with that-Renee was familiar with it because I’d put some writers in Paradise many years prior to…so that was kind of stopped…when I was gone from the other festival, she called me in the middle of all that and said, “Can you please come over here and do something?” and I thought, “Well, this is the perfect time we can do something the first of October, which would be not right on top of the other festival and everybody could just join together and make this one big Gulf Coast Community Songwriters Festival.” I think it’s a really awesome thing that the coast has down here with the music scene and we decided to go for it and we’re in our fourth year.

RC: I’ve gotten that from a lot of people. Everybody’s like “Oh my gosh. We had no clue.” because they hadn’t heard of the other festivals. There are festivals on both sides of us. There’s festivals in Orange Beach, Perdido, there’s festivals in Destin now, Port St. Joe and Panama City and I’m talking about songwriting festivals; they’re just going down the coast. I think it’s just a wonderful thing that these writers are getting acknowledged.

MS: What is the main goal of the Pensacola Beach Songwriter’s Festival?

RC: That’s another thing, Michael. Sometimes I feel like that “festival” is not the correct word for what we do because it’s such an educational process for what we do as well. We go to schools and we talk to the kids about their songwriting, they write lyrics, they send them to Nashville; some of the writers up there that are participating in the festival they put melodies with their lyrics and they come down and perform for the kids. It’s just amazingly awesome and one of our writers from Nashville joined up with Ross Orenstein, a writer down here who is also on the board with the festival and they have created the most amazing Team Green, Save the World. It’s just amazing and you’re probably familiar with what Ross does with that, but I saw a performance at the Seafood Festival on Saturday yesterday and they blew me away. It was just amazing and that’s with the songwriters. The songwriters are doing this and it’s bringing everything together.

MS: Let me ask you, you have so much experience in the music business, what is the best piece of advice you’ve ever been given.

RC: That’s a really hard question. “Get out of the business” (laughs), “Are you crazy?”(laughs). Oh, no. Somebody told me one time, it was a guy at ASCAP which is…I don’t even remember what his title was; I think he was vice-chair or something like that. He’s with ASCAP which is one of the P/R’s for the music industry business and he made a statement to me one time; he said, “For someone to actually do a songwriting festival, it has to be done from the heart, and I see that in you.” It kind of stuck with me. It is my heart and you can tell that, of course, by talking to me and me wanting to go on-and-on about it.

It is very dear to me and it’s dear to me because I do want everybody to know about the songwriters because, I tell you Michael, music is the one thing in this world we’ve got and I feel that music is the only thing that really joins people together. It’s everywhere-you don’t realize-but it’s everywhere you go. Whether it’s an elevator, or whatever, there’s going to be music somewhere in the background, in a commercial. And I just feel like that the recognition with these writers; whether it’s the lyrics or melodies it just needs to be out there. I guess him telling me that was just something that stuck with me. I don’t know that you would say that’s advice, but to me, it was. It helped me keep believing in what I was doing. 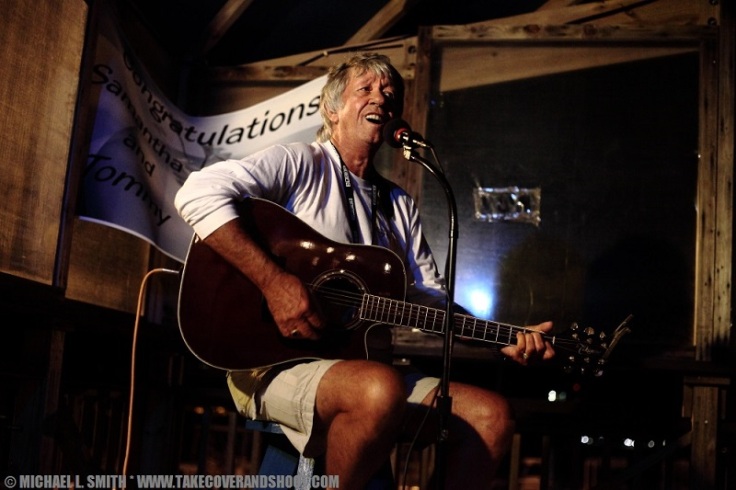 MS: Is there anything else you’d love for the readers to know about the festival?

RC: We’ve got so much going on. We’ve got the seminars, Beth Nielsen Chapman’s got one…when is this coming out, is it coming out Tuesday? She’s going to do a concert after the seminar. Wednesday night we also have a kickoff party, a meet n’ greet at Sabine Sandbar and the music really unfolds on Thursday, Friday, Saturday, and Sunday. We’re having a gospel on Sunday at the Paradise Inn, we’re having another boat cruise on Friday night, which is going to be just incredible. Oh gosh, there are so many things. A big luau on Saturday, everybody’s invited to this. This is a big luau at Aloha Wine & Liquors. We’ve got a pit going on, the whole nine yards, so it should be a fun afternoon from 12-2pm with pig roast and meet n’ greet songwriters, just a fun day and the shows, that the most important thing, so please come out and see the shows and support these guys. Give them your love, show them your love and let them know they’re appreciated.