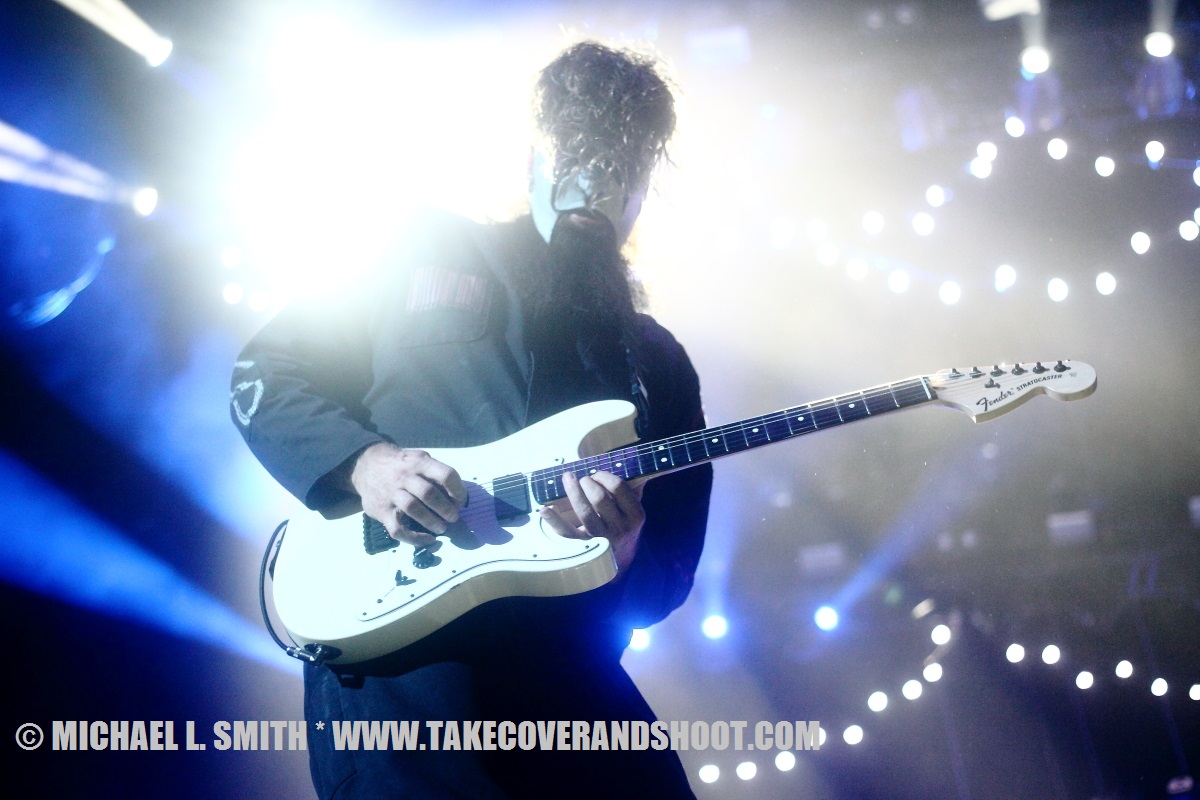 Just The Facts: Unpublished answers from my Pensacola News Journal interview with Slipknot guitarist Jim Root (#4)  for a feature promoting their Pensacola Bay Center show on August 29, 2015-minus the questions.

“Pretty much thought I knew it all. I had all kinds of weird afflictions growing up.”

“I must have seen some video on MTV or something and the Fender Strat…I felt connected to it.”

“I grew up listening to music. My parents had vinyl and all that. I can honestly say from my earliest memories that’s what I always wanted to do. I begged and pleaded. Everything I could do to get my parents to get me a guitar for a birthday or a Christmas or anything. Dropping hints, leaving catalogs laying around. I didn’t get one until I was 14. I wish I could have got more of a head start on it.”

“My first guitar was a Memphis Les Paul Jr. copy. And it was a pretty brutal guitar. Not very well made, but it was a guitar and it was good enough for me to break and mistreat and not appreciate until I got my next real guitar that I really started learning on, a Takamine electric.”

“They sound relatively the same. I designed them with the same woods and the same pickups and all that, but they’re definitely not made for blues or jazz or chicken pickin’ country or slide guitar or any of that stuff. So a lot of the tele purists probably hate the guitar, but it’s an iconic body shape.

“Tele’s, Strats and Jazzmasters to me are so legendary that to be able to endorse a company like Fender and have them on my side and listen to my ideas, it’s absolutely a dream come true. I couldn’t have asked for anything better. I find myself extremely lucky be able to take an idea that I’ve had and have them go, ‘Yeah, that sounds like a great idea. Let’s go ahead and do it.’ You’re talking about Jimi Hendrix, Jeff Beck, Eric Clapton and Rory Gallagher. All these iconic players. It’s amazing to be in that kind of company. You can’t hardly believe it sometimes.”

“Oh man. Jimmy Page. George Harrison. All these guys were larger than life to me. Pete Townsend, Tom Petty, guys like this that are just amazing songwriters, gifted players, gifted ears. When I was in my teens, 16, 17 years old, I was into guys like Malmsteem and Dave Mustaine, all these guys that were doing the metal that I was listening to and that’s where I honed my skills. I learned to play by ear by playing along to the records that I was listening to which was ‘Killing is My Business…and Business is Good!’ and Anthrax. All these records, Iron Maiden, Dave Murray and guys like that, Adrian Smith. Tony Iommi and even guys like Stevie Ray Vaughn. There’s just so much you can do with a guitar. Everybody approaches it a little bit differently. It’s crazy.”

“It’s tough. I ain’t going to lie. There are a lot of relationships that tend to suffer when you spend so much time away and for me, over the past 16 years, for a time, I was juggling two bands. When I come home from a tour, I tend to shut off, lock myself up in my house and I don’t ever want to leave or do anything because I just saw every country in Europe. I got to eat at all these amazing places and I basically just had a vacation playing all these shows everywhere.”

“So when I get home, it’s like home is my vacation. It’s part of the reason why I moved down to Florida. I want to be able to ride motorcycles and drive my old cars without worrying about snow on the ground and all that shit. It’s tough. I have friends that I went to high school with, that I don’t really see that often, partly because they live in Iowa and I live down here and partly because they’ve all started families and careers and things like that. When I come home from a tour, if I have a month off, I can sleep as late as I want. I can stay out as late as I want. These guys, ‘Well, I got to wake up and take my kid to school before I go to work and then after I go to work, I got to do this and that,” so you don’t get a lot of hang time anymore. I had a good buddy back in Iowa and we used to go fishing every once in awhile and you can’t really do that so much anymore.”